Cubivore: Survival of the Fittest Review 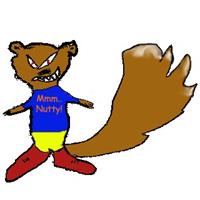 Well, first off, Cubivore: Survival of the Fittest is a weird game. With its unique art style, action-oriented / color-combining gameplay, and a bizarre story, Cubivore has a lot of interesting things going on, but is it any good?

Originally slated for release on the ill-fated Nintendo 64 Disk Drive peripheral, it was later moved to the GameCube and eventually released in Japan and North America in 2002. The game was co-developed by Intelligent Systems and Saru Brunei and published by Nintendo themselves in Japan, with Atlus handling the North American release. Although the game received a mixed reception and had a limited print run, it did inspire a trophy in Super Smash Bros. Melee, but otherwise this is a fairly standalone experience. 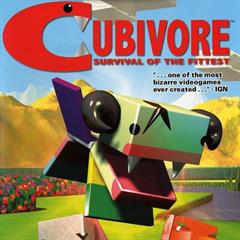 In the game, you control a creature known as a "cubivore" and you wander around the game world looking for other cubivores to battle and ultimately devour. As you do this, you'll run across "raw meat" of various types, which allows you to mate with female cubivores, after which you will control the resulting offspring. As part of this process, your new creature will have an additional limb (aka cube) that lets you, the player, grow in power. Oh and while you're munching on all of those cubivores, you'll be consuming and ultimately combining their colors to create different mutations, all with varying base statistics and sometimes requiring slight control adjustments. In between meals, you'll also be visiting various training grounds to improve different parts of your body such as your horns, facial scar, tongue, and...hump? So yeah, this game is weird.

While the game revolves around evolution and mutation, it's not nearly as open-ended or customizable as you might think. The game is structured in a typical level-by-level video game format. You generally have to move from point A to point B, then fight a boss to open up the level exit. I mentioned before that you can mate and produce offspring, but even that whole process is only available at very specific moments in the game. In fact, there are certain times when the only way forward is to enter the mating grounds, which essentially forces an evolution of your creature. Of course, while you're traversing a level, there are all sorts of cubivores for you to consume and build out your mutations list, and that's really the core of the game.

Each cubivore is aligned with a certain color. There are five colors and initially, they're available in three shades: Pale, Dark, and PaleDark. When you consume another cubivore, one or more of your own limbs is changed to whatever color you just consumed. By filling out all of your limbs with, say, Pale Blue, you'll mutate into a Pale Blue cubivore with however many limbs you have. Since you can gain up to six limbs throughout the game, that means there are six different Pale Blue mutations for you to find. Later on in the game, you'll run across Rage and Clash colors, which add more variation to the mix and when it's all said and done, there are 150 different mutations or color combinations for you to find. The overall goal in the game is to find 100 mutations so you can take on the final boss and become the King of the Cubivores.

For the most part, the levels themselves are linear, so it's always easy to figure out where to go and what to do, but if you want to fill out your mutation list, you have to be resourceful in consuming other cubivores since they don't respawn. If you just haphazardly eat anything you see, you'll end up with very few mutations over the course of the game. I actually really enjoyed this aspect as each level was sort of like a puzzle for figuring out the most efficent way to discover new mutations.

Since the number of limbs you have factors into the mutations you can find, the game keeps you moving along at a brisk pace by forcing you to mate at certain points. That means you'll likely have some gaps in your mutation list as you progress through the levels. But, the game is essentially cut into three chunks where you start out as a one-limbed cubivore and grow into a six-limbed one. This allows you to take a few cracks at finding all of the mutations, but the game does throw in some additional variables later on with the Rage and Clash colors I mentioned before, which only adds to the mutation madness.

Of course, most of the other cubivores aren't going to just let you nibble on them without fighting back and that's where the combat comes in. You'll spend a great deal of time in combat and it's kind of a mixed bag. Combat is fairly easy to get a handle on as you just hold down the L-trigger to target what you're facing and then press the A button to attack. The problem is, the camera doesn't automatically center on your target and your enemies love to run around maniacally and I found it difficult at times to keep a lock on them. Enemies can also knock you around a bit if they smash into you, which can throw your targeting off even further. It's a shame the combat controls are so clunky because I enjoyed the combat itself when I could actually tell what was going on. When your enemy drops to 0 hit points, you have the option of consuming one of their limbs. As you grow in power, you'll actually rip off more than one limb at a time and this can be detrimental to your plan of combining colors, but luckily the game allows you the option of only eating one of them...if you press certain buttons at the right time.

So anyways, I generally liked the combat, but was frustrated at times with the camera and lock-on system. But since combat is a huuuuuge chunk of the game, if you don't find it appealing, you'll likely not enjoy this game.

From a technical perspective, Cubivore is fairly middle of the road for a GameCube release. The graphics are intentionally blocky since everything is cube-ified and there's limited texture detail, but overall it fits the theme rather well. The game runs at an acceptable framerate and load times are minimal, so I really don't have any complaints in terms of graphics.

The audio portion of the game is also minimalistic with low-key, atmospheric music at times and basic sound effects while wandering around and engaging in combat. Some of the combat sounds are rather entertaining because it sounds like a bunch of savage beasts fighting to the death, but it's really just a bunch of cubes smashing into one another.

As a bonus, the North American release of the game has an amazing instruction manual with a ton of information on the game, as well as some awesome pictures that help bring the cubivores to life a bit. The cover art is also great and really the physical components just set the tone for the experience found on the disc. Furthermore, the story and English translation are both wonderfully wacky and match the overall theme and gameplay very well.

I know I've mentioned multiple times that Cubivore is a weird game. And it is. But it's also an enjoyable and incredibly unique experience. The combat does have some frustrating elements, but the game's charm and addictive mutation system were more than enough to keep me engaged.

It's a shame that it was seemingly lost in the shuffle when transitioning from the N64 DD to the GameCube and despite being a Nintendo-owned property, it has never resurfaced, even in the form of a digital re-release. Given that it's such a niche title and wasn't a huge hit initially, it's unlikely the game will make a return anytime soon. The North American release is super expensive these days and can easily go for $300+ for a complete copy. On gameplay alone, I don't think it's quite good enough to justify that price tag, but ultimately it's a great collector's piece that can also provide a solid 8 or so hours of color matching, cubivore-snacking gameplay.