Released in 1997, Bravo Air Race is an arcade racing game for the PlayStation. It was developed by Metro Corporation and is also known as Reciproheat 5000 in Japan or simply Air Race in Europe. The game had a mixed reception upon its release, but I'm a big fan of the genre, so let's see how this one stacks up. 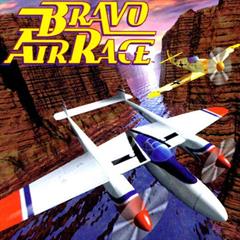 As its name implies, Bravo Air Race is a racing game...in the air. That's right, instead of the usual vehicles like cars or karts, this game has you piloting an aircraft that you'll use to zip around various tracks. Although you have more freedom of movement, the game is very easy to pick up and play thanks to a simplistic control scheme, so you'll be flying around arcade-style in no time. Aside from doing barrel rolls that can provide you with a time bonus, there aren't really any advanced mechanics that are often found in arcade racers, such as drifting or what have you. This somewhat limits the rewards in mastering the tracks, but it also allows pretty much anyone to jump in and have fun immediately.

To keep you on course, the game provides a "race line" of sorts that helps guide you through the tracks. Additionally, the game will gently adjust your altitude to try and keep you in the aforementioned race line. That being said, it's still possible to crash into walls, the ground, or just fly out of bounds, so to speak. Since you're primarily flying through areas that don't have any sort of overhead obstruction, the game will detect if you stray too far from the action and will in turn immediately slow your plane down. This may sound like a nuisance, and it kind of is sometimes, but for the most part it's not too difficult to stay on course and becomes less of an issue as you memorize the track layouts.

The setup in Bravo Air Race is similar to games like Ridge Racer and Daytona USA where you simply select a vehicle and a track and you're ready to go. There isn't any sort of Championship or Career Mode, so the single player mode is very loosely structured. If you do manage to place 1st on all of the tracks, then you'll be treated with a short cutscene and then the credits will roll.

The main game mode will have you racing three laps against 11 opponents, as well as the clock since you'll have a limited amount of time to complete the race. Much like other arcade racers, you'll have a chance to increase your available time by reaching various checkpoints. I observed very little variation in the computer opponents and it always seemed like a foregone conclusion that I would win the race if I could put together a solid run and avoid smashing into too many objects along the way. For better or worse, the CPU opponents didn't seem nearly as ruthless as those you often find in this genre. Additionally, unlike other arcade racers, I never felt like the clock was really a factor in the game and it seemed rather unnecessary, but it also didn't detract from the experience either.

Overall, I found the core gameplay in Bravo Air Race to be surprisingly quite fun. The only problem is, there just isn't much of it! The game only has four tracks and as far as I could tell, there aren't any hidden ones or any sort of mirroring options. Now, I know other similar games from this era typically only had a handful of tracks as well, but certain other games took me a lot longer to learn the tracks and out-maneuver the AI to actually win each race. With Bravo Air Race, you can likely reach the credits in less than an hour.

Despite the short playtime, the game does have a little bit of replay value going for it. First off, there are 10 planes you can choose from, all with varying statistics that can lead to a different experience while racing. There are also a couple of hidden planes, but I think they're accessible only through a cheat code. In addition to the main single player mode, there's also a Time Attack mode and a two player mode to sort of round out the experience.

Outside of the gameplay, Bravo Air Race is a bit of a mixed bag in terms of its technical prowess. The graphics look decent enough for 1997 and the frame rate is solid for the most part...but there's a catch. In order to achieve such a smooth experience, the game has some very poor draw distance. This is another thing that's common for the era, but it seemed significantly worse than what I'm used to. This ultimately wasn't a huge problem since the gameplay was generally pretty easy overall, but it can be really annoying when you're first learning the tracks.

The sound effects and music are both passable, but neither really stood out to me. The soundtrack sort of reminded me of Ridge Racer, but nowhere near as good or as expansive.

In the end, I found Bravo Air Race to be a good, but not great arcade racing game. It's generally a fun game and flying airplanes is certainly a nice change of pace, but at the same time it just seems to lack a certain something to help elevate it to be a hidden gem.

If I had paid full price for this game in 1997, I would've certainly been disappointed after finishing the game in an afternoon. But now, over 20 years later, the game is relatively inexpensive and should only set you back about $10.00 for a complete copy. At that price point, the short playtime is a bit more palatable, especially since the gameplay itself is fun and might be something you'll want to revisit from time to time.

The original PlayStation is loaded with great racing games and Bravo Air Race may not be on the top tier, but it might be worth checking out if you're a fan of the genre looking for something a little different beyond the big names out there.